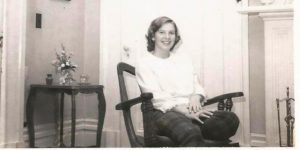 order a hamburger while they were eating lobster.  I’d never been to a fine restaurant. I didn’t even know you could eat lobster. When Dad took the family out it was to the local BBQ drive-in, where they put a tray on your car window and we’d order the ultimate luxury, a chocolate milkshake.

I was beyond naïve, I was scared, shy, filled with anxiety and even so I kept moving forward, one foot before the next, a blessing of being the oldest I suppose. Never understanding myself, the people around me, nor did I have any idea of where I was headed. Telling my parents of things, “I’d seen- little ghost girl walking down the hall,” or dreams I’d had that had happened, and being told angrily, I don’t believe a word of that. Why are you making that up?” I quieted down and finally ignored my inner voice.

Tobacco, corn, wheat, soybeans, dairy cows and a big summer garden was what I knew. In the summer sunrise to sunset planting tobacco, chopping weeds, running to get water for the workers, and most importantly trying to be invisible, trying not to get in anyone’s way. I was mostly the house-worker, preparing meals (I made great cakes) changing beds, vacuuming, and dusting every little thing while day dreaming about escape.

In late summer, tobacco season, while handing leaves at the tobacco barn my Dad’s youngest sister, our favorite aunt, if she was in a good mood, which was rare, would entertain us with music she could make (sounds like clarinet, trumpet, trombone) with her mouth. She would play entire songs like that. A great talent, we thought.

Like the one about a gathering of eight country ministers to preach that old time religion commencing Friday evening, all day Saturday and ending on Sunday afternoon-a very long weekend of serious sermons preached by very serious men. No lightweights, these. They were members of The Primitive Baptist Church and preached God’s almighty and serious message of predestination, retribution and salvation. They were serious, ponderous and old.

It happened that we had our own Church built by my great-grandfather’s family. The annual meetings were called “Association” meetings. Meals were held on the church grounds, wide planks of wood on saw horses, covered in fancy table clothes. After morning preaching, the church would clear out and the women would hurry to their cars.  They’d commence to unloading backseats and trunks of aluminum foil covered platters; fried chicken, roast beef, pork BBQ, still warm Pyrex casseroles; green beans, which we called snaps and butter beans, corn pudding, sweet potato pudding, macaroni and cheese; silver dishes with cold salads, coleslaw, fruit salads, beet salads and all sorts of pickles. And many baskets of freshly made dinner rolls. Dinner on the church grounds was ready.  And what a feast it always was.

After the evening sermon the ministers, called Elders, went to a host home to rest up for the next day’s preaching. The Elder’s wives slept in one room and the men in another. One night one of the visiting preachers was snoring very loudly, solidly loud, all night long; never a break. The others managed to get through the night, although with little sleep and they said nothing. It made for a tiring day. The next night the snoring started and again it was long and loud. Finally around 2 AM he snorted and stopped snoring altogether. After a considerable time of quiet, an Elder spoke, “He’s dead and I’m glad of it.”

« 2nd blog on being a literary agent
More Writing…… »