Farming was a family affair; grand-mamma 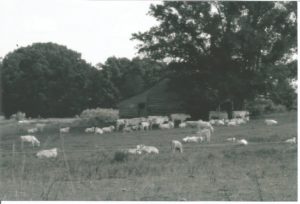 , granddaddy, sisters and brother, tenant farmers and the hired hands. We were always dirty, covered in tar from the tobacco leaves, our hands and feet calloused and rough. My sister and I would go to the watermelon patch and bring back melons in between sleighs of green tobacco leaves that we’d hand in bundles of three to Mom as she tied them onto a tobacco stick. And be quick about it, too.

From sun up until sun down we toiled, along with the adults and that made it a long day for children. The good parts of summer were; no school, and lots of watermelons and cantaloupes, fresh vegetables, big family gatherings and city cousins that seemed to drop in from another world.

These kids of my Dad’s sisters and brothers were wild, crazy, no respect for anything – we thought they were like animals and were a bit afraid of them. They ran through our house in packs, they broke anything they touched and laughed about it. They did things that if we’d done, we would’ve been in big trouble. They had absolutely no sense about anything. One of the boys broke my brother’s bike and just laughed. They thought we loved having them visit but we dreaded it. Mom and Dad made us be nice to them. We hid from them as much as was possible.

They all grew up to be good Christians.

We wandered the farm’s 200 plus acres. It had two ponds, a lazy river, lots of trees made especially for us to saw down and make forts. Dad trusted us to take care of his tools and let us use whatever was in the tool shed. We had adventures, fished, shot BB guns and seriously entertained ourselves in between working days. It was a good life.

I knew how to work, take care of the little ones and keep my sister from killing our brother.  At age 8 I knew how to peel enough potatoes for a noon meal of four hired hands and our family of six was what I knew. Canning, freezing, cooking and cleaning house was what I knew. My Dad came from a family of hard workers. They didn’t believe in having free down time and they were relentless with a never ending list of tasks that had to be done and done well.  My Mom complained from sun up to sun down about what a mistake she’d made. She’d been working in Washington DC at the Pentagon when she met Dad and he’d promised he wouldn’t farm. He lied. She’s been mad ever since.

Not to say that it was all work, there definitely were good times. The four of us, we were skinny but strong and we played all kinds of sports; baseball, basketball and kids games until dark on summer nights.  Mom and Dad often played with us as they were both very athletic. Dad had played baseball in high school, Mom had played basketball in high school and while working in Washington D. C. Mom was really agile and would walk on her hands, do cartwheels, and stand on her head to entertain us.

I played games but my heart was never in sports. I kept my nose in a book and lived in other worlds as often as I could. There were times I was walking around participating in farm life but I was living in two worlds-the one I was reading about and the one I had to be a part of. Unlike most local farm families we had a large library. Mom and Dad were both avid readers. As a child I read Edna Ferber and James Michener, The Arabian Nights and numerous Readers’ Digest Condensed Books. There was one shelf off limits. Mom said I could read all the other books in the library but those were too old for me.  Naturally they were the first books I read.