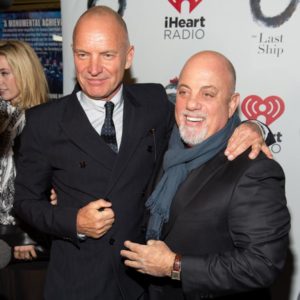 Billy Joel and The River of Dreams

I was in London on business and picked up the London Times, as one is wont to do when in London. In the magazine section, on the cover was a photo of heart throb singer, Sting promoting his new album, Dream of the Blue Turtle. It was released in 1985. In the article he talked about his dreams and how the title and the lead song came to him in a dream.  I kept that in my mind because I’d been trying to get a documentary series produced on the subject of dreams, tentatively titled, The Power of Dreams, for years and years.

Finally, after a million rejections, “no, not for us,” from every network, every cable system and three pitches to Discovery, and questions from programmers like: “What are you going to do, put a camera in somebody’s head?” Finally in 1992 I had a deal with the Discovery Channel. Persistence pays off. Or it backfires. Back when Discovery was one channel instead of the media conglomerate it has become.

We went into production and I still had the Sting article from the London Times and wanted Sting to be interviewed. By that time of he had an apartment near Central Park and, connections are everything, a young producer who had worked for me on another project and when that project ended, had moved on to MTV and, lucky for me, had recently interviewed him.  She assured me that he was definitely interested in “our” categories – dreams, psychics and spiritual wisdom.

Discovery was in charge and weren’t interested in Sting-for some reason I never knew, but I kept bringing him up and his album and his story and his dreams. Finally they suggested Billy Joel.

“Billy Joel? What does he know about dreams? No, no I don’t think so. “

It turned out that Billy Joel was an encyclopedia of dream knowledge. In fact, he had a piano connected to a computer right by his bed so when he dreamed music or lyrics all he had to do was sit up, swing his legs over and start playing the piano – it was recorded immediately.  “New songs, new lyrics – that is where my dreams come from – dreamland.”

In our series on, episode two, The Creative Spark, Billy Joel said that all the music he composes comes from his dreams.

I was so impressed and so excited.  Billy Joel was perfect.

Lesson: Listen to your inner voice but be open to change.

« Two Orthodox Jewish Rabbis Walked Into my Literary Agency
The Keys of Egypt: The Obsession to Decipher Egyptian Hieroglyphs by Lesley and Roy Adkins »