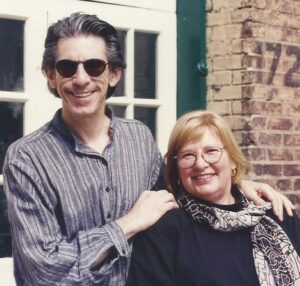 My small story about the character actor Ned Beatty.

Photo of Richard Belzer and Sandra Martin on the set of Homocide.

Richard was a literary client and a good friend. I’d sold his book, UFOs, JFK, and Elvis: Conspiracies You Don’t Have to be Crazy to Believe.  He played Detective Munch, on a television series, Homicide: Life on the Street. It was shot in Baltimore, ran from 1993 until 1999.  Detective Munch’s character was kind of a smart ass and had a hidden past. His partner on the series, Detective Bolander was played by Ned Beatty. Bolander, Ned’s character was quiet, reserved, never showing his feelings-shut down. Which is kind of funny, which you’ll see, as you read on.

Richard and some of the other actors were invited to a benefit golf tournament for a police organization near Charleston, South Carolina. Richard asked me if I wanted to go with him. I was often his alternate date since Harlee, his wife, was in France decorating their new home. And I was always up on any new conspiracy theories which Richard absolutely loved hearing. Richard was the most intellectual, well-read, connected person I’d met in the Conspiracy Field. He knew his facts and he knew, “fake-I-just-made-it-up-to-make-a-buck-news.”  A rare commodity I had learned while representing conspiracy authors.

Okay.  It was a weekend and I thought it’d be fun.

We were flown down on a chartered plane, a very early flight, and it was a fun, exciting, and a very entertaining plane full of coffee filled actors and film crew- loud and fun as anyone would expect.

That morning on the plane, Ned Beatty was sitting across from us and we had an entertaining conversation.  Actually it was mostly about his on-going depression, how lousy he felt, and no end in sight, etc. interspersed with stories of movies he’d been in and characters he knew.

Ned had acted in so many extraordinary films: Deliverance; Network; Friendly Fire; Nashville, Lex Luthor in Superman. He won an award for playing Lex Luthor: Best Villain. Listening to him give forth on parts and character development was a joy. It was the sad depressing bits that weren’t so great.

Richard was sweet and very considerate to him and after we landed, got our rooms, and were then wandering around in the lobby, waiting for the “next” thing to start. I noticed that Ned was always looking for us. So we sat together at our big breakfast to start off the event.  The golfers, the sponsors and the camera crew as well as the stars were walking from table to table chatting up everybody. As they passed by Richard and me they’d say hello to Ned, and hello to me, calling me Mrs. Beatty. I guess they knew I wasn’t Harlee, Richard’s beautiful wife.

As we moved along headed towards the bus to take us to the golf course, I was greeted with lots of people I didn’t know saying, Hello or Good Morning Sandra. I thought it was sweet that they all remembered my name, but then they were actors and good memorizers, I guess.

Ned and I were thrown together, often during those two days.  And I finally realized Ned was a tiny bit “off” – also sad and caught up in all the things that had gone wrong for him, that particular week. Heavens.

He’d find me and ask me if I knew where his pills were and I’d scan around looking for his “bag” with scripts and pill bottles. He was taking medication for his depression and talked and talked about his feelings, his depression, his mixed up life, —etc. – how acting had actually saved his life. He needed someone to listen and I believe that the other actors had gotten their fill, so I listened. I was his helper, his fixer and his “new friend.” Not his wife although I was still getting those “Hi, Mrs. Beatty.”

I seemed to be his person of choice to confide in that weekend. After a while, I started hiding from him because I liked chatting up those actors, but Ned would find me. I’d hear him, “Has anybody seen Sandra?” Right up till we got on the plane to fly back to NYC the people that hosted the event wishing us safe travels as we got on the bus, to the plane, the crew and the Homicide cast all called me Mrs. Beatty or just Sandra.

Finally I just went with it.

I read many years later, in Ned’s obituary, that Ned’s wife’s name was Sandra. She was his fourth wife. They divorced in 1998.

Richard thought all of this was comical. And often after that weekend, when we’d meet for whatever, he’d start off with that crooked smile of his, “How is Ned today, Mrs. Beatty?”