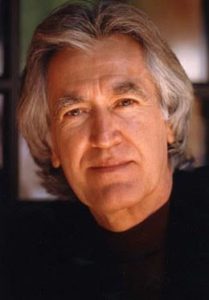 Pacing, pacing back and forth, from the doorway of my office at 52nd and Broadway, to the far wall of bookcases directly behind my desk. Long legs made it a quick trip up and back until finally stopping, placing both hands on my desk, leaning forward to look directly into my eyes he made his case.

He was the most obvious person for the job as host; he had the knowledge, the resume, was articulate, and very handsome. He knew all the movers and shakers in the alternative medicine field. He definitely knew western mainstream medicine. He knew what worked and what didn’t. And he had been a hit on Oprah!

Dr. Dossey was enthusiastic, knowledgeable and brimming with energy. The producer with him was eager as well nodding and throwing in a “yes-indeed” at every break in Dr. Dossey’s pitch.

My eyes kept being drawn to the producer sitting right in front of my desk. I couldn’t seem to look away. The producer had orange skin. Orange skin? Really? Was it truly orange? Was it make-up? Was it a skin condition? Or even a reflection from the street? I couldn’t tell.

It was hard to look away.

Finally, Dr. Dossey slowed down and the orange-skinned producer jumped in to give me all the agenting and business reasons I should try to get a series like this on air.

After 30 minutes of the pacer and the orange-skinned man and me mostly just nodding my head yes to all the obvious reasons Dr. Dossey should have his own show, I put my hand up, stopped the pitch and asked a question.

Dr. Dossey sat next to the producer. A quiet moment.

I asked the producer, who was high level network producer with a national talk show why hadn’t he tried to get Dr. Dossey a series. He obviously had more contacts than I did. He was already “in the system” and was certain to have far more influence than I would-as a literary agent with a few documentaries under my belt.

“I’ve tried. Executive producers, programmers, mid-level show-runners say they are interested and they understand but they say Middle America isn’t where we are.”

I understood his problem. Selling books in the field had been difficult because people in Manhattan seem to think they know everything about everything. Understandable: they were in New York City, the source of all acceptable knowledge. Of course, they thought they knew everything. Meanwhile health professionals across the country were opening alternative health clinics and using alternative therapies: Chinese herbs, homeopathy, reiki, and acupuncture, flower essences-you name it they were trying it. Mainstream Americans, sick of big pharma, were attending seminars too numerous to believe–all without any national acknowledgement-from New York City.

But to go back.

The first time I heard Dr. Dossey speak was in Dallas, Texas. It was the mid-80s. I had decided to attend a conference at the last minute and had assumed, incorrectly, that it’d be like conferences I’d attended in California, Colorado and Virginia Beach. Very casual. That wasn’t the case here. At the Isthmus Institute of Dallas, it was very formal, very high-end. Men were in bespoke suits and gracious southern women were in pearls, hats and gloves; beautiful dresses-all in all a very elegant affair for a conference on Consciousness and Alternative Health. There were a few pantsuits.

Then there were the two of us: me, recently from Manhattan, late of Virginia Beach in denim and a very casual sweater and another direct from Manhattan in black leather. A thin woman with dark curly hair and a very short leather skirt, leather jacket and knee-high boots. She looked good in all that leather. I was a beach blond, enthusiastic and dressed for a casual day listening to lectures. We stood out; we didn’t belong in this setting. Scanning the room, we were drawn together because we recognized a fellow wayfarer from afar. We got our coffee, huddled together and examined the attendees.

We knew each other. I knew her because she was an editor at a big publishing house. She knew me because I’d sent her book proposals. We had lunches. I was a beginner agent and she was a gracious editor.

We listened as Dr. Dossey was introduced. He graduated from Southwestern Medical School in Dallas in 1967. Then he served as a battalion surgeon in Vietnam, where he was decorated for valor. Currently (mid-to late 80s) he was Chief of Staff at Medical City Dallas Hospital.

Dr. Dossey’s lecture was about his life as a doctor and surgeon. It was a moving and powerful story-looking for meaning in life, looking for the soul, the source of consciousness. It was about what he’d seen, experiences he’d witnessed but had no answers for and sharing what happened to his life and career as he turned to find those answers. His lecture, for which he got a standing ovation, was about the medical case that started him on the journey of seeking for answers that aren’t found in medical schools. Prayer and healing.

Afterwards my editor friend said: “Do you think he could write a book with that kind of passion?”

I told her I thought he could do anything. He was amazing. After the lecture she went up, chatted with him a bit and gave him her business card.

The result was: Recovering the Soul: A Scientific and Spiritual Search, published in 1989. The  blurb from the book says it all: What is the soul? Can the soul be scientifically explained? In this thought-provoking book, Dr. Dossey provides an alternative view of human                      consciousness, one which asserts that an aspect of the human mind-the soul exists independently of time, space and matter.

In his provocative lecture spilling over with love of life, enthusiasm for wisdom and ancient knowledge connecting to our current world of medicine, Dr. Dossey brought together mysticism and scientific research. He said, “We are a connected human race and our souls are never-beginning, never-ending.”

I definitely wanted to read that book. As did many millions of others. It was a best-seller.

That was five years ago and now sitting in my office I felt certain it was time for a daytime television series. I, for one, wanted to see his series on air. I was certain that there were millions of American citizens who wanted to see and hear what he had to say.

We worked up a proposal and I made the mainstream and cable network rounds. Not one of the television programming heads in New York or Los Angeles seemed to understand. They truly thought Americans weren’t interested in alternative medicine or that Americans were too intimidated to question their doctors.

I spewed out all sorts of statistics for why this was a great idea, an idea whose time had come. But no was always the answer. Not that a single executive had an answer for why the herbs, vitamins and alternative cures were the fastest growing segment of the health markets. They believed that doctors were gods and no one would question them. Plus who’d be a sponsor? Not the pharmaceutical companies that was for sure.

An alternative health series wasn’t to be for almost 20 years. Dr. Oz led the way and that was only because Oprah Winfrey was his executive producer. She put him on air and he has been very successful although he has been attacked whenever possible by the gate keepers of our healthcare system.

It is a shame because Dr. Larry Dossey would’ve kicked ass and done an awesome job.