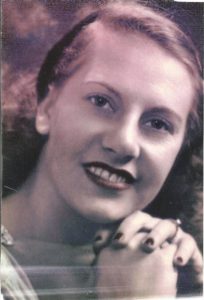 My Mom, who I take care of, is 94, soon to be 95. We were watching CBS Sunday Morning and they had a short tribute to Arthur Geoffrey. Mom is hard of hearing and so I wasn’t sure she could hear, but as they had clips of Geoffrey’s old shows, she quietly says, Mr. Geoffrey called me Snowflake.

That was it, he called me Snowflake.

I found some of her papers about when she was living in Washington DC and have recapped a bit of her story.

It was 1942. Mom, Florence Ferrell, wanted to take a secretarial course because government girls were sorely needed for staff positions during World War II. After graduating from Dinwiddie High School she went to Roanoke, Virginia to a secretarial school. After graduating she was waiting until she was 18 so she could pass the Government Civil Service test. You had to be 18 to take it. Passing it allowed you to apply for jobs in Washington DC. She passed.

Scared little country girl, she said she was, but took the bus from DeWitt and off she went.

Her job was with The Signal Corps, Intelligence Department. What an experience she had. She was a member of the United Nation’s Girls and sold war bonds and went to Tea Dances to dance with the soldiers on the 14th floor of the National Press Club.

The U.N. Girls were up on the stage with the band and Mom had on a white evening gown.

Mr. Geoffrey kept talking with her and every time he called her up to the microphone, he called for “Snowflake.”

One of my Mom’s memories.

« The Copper Wall
They Are Here »